"  The Python programming language has become more and more popular in handling data analysis and .."

The Python programming language has become more and more popular in handling data analysis and processing because of its certain unique advantages. It’s easy to read and maintain. pandas, with a rich library of functions and methods packaged in it, is a fast, flexible and easy to use data analysis and manipulation tool built on top of Python. It is one of the big boosters to make Python an efficient and powerful data analysis environment.

pandas is memory-based. It does a great job when the to-be-manipulated data can fit into the memory. It is inconvenient, even unable, to deal with big data, which can’t be wholly loaded into the memory. Large files, however, like those containing data imported from the database or downloaded from the web, are common in real-world businesses. We need to have ways to manage them. How? That’s what I’d like to say something about.

By “big data” here, I am not talking about the TB or PB level data that requires distributed processing. I mean the GB level file data that can’t fit into the normal PC memory but can be held on disk. This is the more common type of big file processing scenario.

Since a big file can’t be loaded into the memory at once, we often need to retrieve it line by line or chunk by chunk for further processing. Both Python and pandas support this way of retrieval, but they don’t have cursors. Because of the absence of a cursor mechanism, we need to write code to implement the chunk-by-chunk retrieval in order to use it in functions and methods; sometimes we even have to write code to implement functions and methods. Here I list the typical scenarios of big file processing and their code examples to make you better understand Python’s way of dealing with them.

Below is a part of a file:

To calculate the total sales amount, that is, doing sum over the amount column:

pandas supports data retrieval chunk by chunk. Below is the workflow diagram: 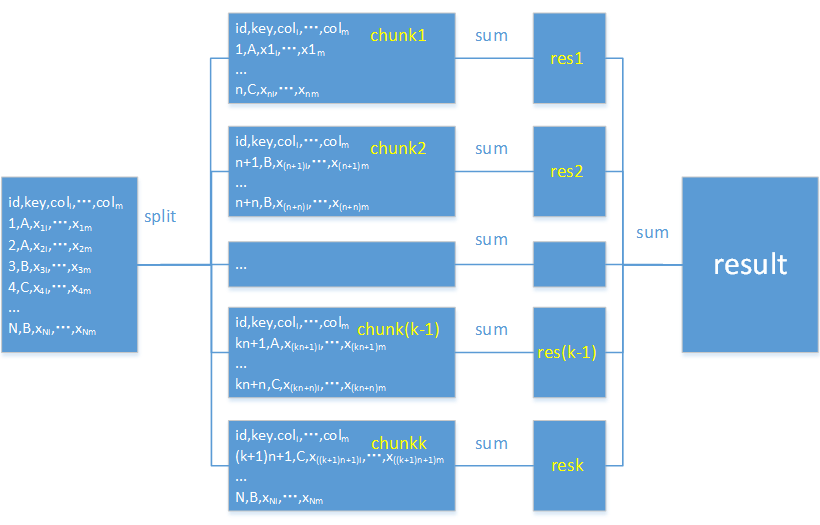 The workflow diagram for filtering in pandas:

Similar to the aggregation, pandas will divide a big file into multiple chunks (n), filter each data chunk and concatenate the filtering results.

To get the sales records in New York state according to the above file:

The logic of doing aggregates and filters is simple. But as Python doesn’t provide the cursor data type, we need to write a lot of code to get them done.

The workflow diagram for sorting in pandas:

Sorting is complicated because you need to:

1.   Retrieve one chunk each time;

3.   Write the sorting result of each chunk to a temporary file;

4.   Maintain a list of k elements (k is the number of chunks) into which a row of data in each temporary file is put;

5.   Sort records in the list by the sorting field (same as the sort direction in step 2);

7.   Put another row from each temporary file to the list;

8.   Repeat step 6, 7 until all records are written to the result file.

To sort the above file by amount in ascending order, I write a complete Python program of implementing the external sorting algorithm:

Python handles the external sort using line-by-line merge & write. I didn’t use pandas because it is incredibly slow when doing the line-wise retrieval. Yet it is fast to do the chunk-wise merge in pandas. You can compare their speeds if you want to.

The code is too complicated compared with that for aggregation and filtering. It’s beyond a non-professional programmer’s ability. The second problem is that it is slow to execute.

It’s not easy to group and summarize a big file in Python, too. A convenient way out is to sort the file by the grouping column and then to traverse the ordered file during which neighboring records are put to same group if they have same grouping column values and a record is put to a new group if its grouping column value is different from the previous one. If a result set is too large, we need to write grouping result before the memory lose its hold.

It’s convenient yet slow because a full-text sorting is needed. Generally databases use the hash grouping to increase speed. It’s effective but much more complicated. It’s almost impossible for non-professionals to do that.

So, it’s inconvenient and difficult to handle big files with Python because of the absence of cursor data type and relevant functions. We have to write all the code ourselves and the code is inefficient.

If only there was a language that a non-professional programmer can handle to process large files. Luckily, we have esProc SPL.

It’s convenient and easy to use. Because SPL is designed to process structured data and equipped with a richer library of functions than pandas and the built-in cursor data type. It handles large files concisely, effortlessly and efficiently.

SPL has the embedded parallel processing ability to be able to make the most use of the multi-core CPU to boost performance. A @m option only enables a function to perform parallel computing.

There are a lot of Python-version parallel programs, but none is simple enough.