"Example An Excel file book1.xlsx starts from the second column, and every two columns is a pair .."

An Excel file book1.xlsx starts from the second column, and every two columns is a pair (that is, the even and odd columns except the first column, such as the second and third columns). There are a total of 4 pairs of such columns. Details as follows:

Now you need to group according to the first column and all the even-numbered columns, and summarize the odd-numbered columns in the group. The result should be as follows: 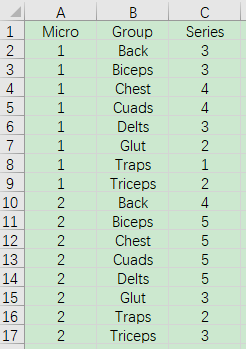 A1 Read in the book1.xlsx file, the option @w means read as the sequence of a sequence. After reading out, take out the second row to the last row.

A3 Group A2 according to Micro and Group, and calculate the sum of Series as the Series column