"【Abstract】 The essay analyzes the fundamental reason behind slow SQL statements and provides the .."

SQL Performance Enhancement: IN Operator in WHERE Clause

【Abstract】
The essay analyzes the fundamental reason behind slow SQL statements and provides the solution to make improvements through code samples.

It is not uncommon to use the IN operator in WHERE statement. Such an example is the filtering operation by enumerated values, say, the customer age groups, by regions, or by orders.

An IN condition is usually written in the format of F IN (f1,…,fn). The condition is true when F field value is included in the set of values {fi,..}.

The computation of IN condition is slow because:

1. One to n comparisons between an F value and members of the set of values are needed when the left-to-right search is used to check whether F is contained in the set. Even if the binary search can be used when the set is ordered, a number of comparisons are still needed. The IN operator is thus extremely inefficient. The larger the set of values, the slower the computation;

2. The fields involved are often string type, which uses more storage space than integer type and which is slower in performing the comparison operation. A huge volume of data is commonly stored in the external storage devices. The IN computation is slow to both read in strings and compare them, particularly when a full-table traversal is involved.

First, we need to find the value range for IN field.

Usually there are only a few possible value ranges. Sometimes a code table, which we call dimension table, is created to store all possible values. Correspondingly, we call the to-be-queried table that contains the IN field the fact table.

Whatever the dimension table already exists or it is generated later, it needs to be ordered by the set of values, so we can use the binary location (we will discuss it later) to speed up the subsequent computations.

Second, convert field values in the fact table into integers.

Third, convert the set of IN field values {fi,..} into a Boolean dimension sequence.

Fourth, achieve the IN condition.

The query still requires a full traversal of the fact table, only without the need of comparison operation on the set of IN values. Since we have already converted the IN field values into sequence numbers of corresponding items in the dimension table, we can use the sequence numbers to get members of the Boolean dimension sequence. If a member retrieved is non-null, the field value is a target of the IN filtering condition; otherwise, the field value is not an eligible one.

Essentially, the method reduces computing time by converting “comparison of values of a set” into “the reference of sequence numbers”. Whatever the size of the set of IN field values, to achieve the filtering operation each field value will only need to reference a member of the Boolean dimension sequence according to the corresponding sequence number during the fact table traversal. The computing time is not connected to the number of enumerated IN values any more. It won’t increase as the number of enumerated IN values grows. The complexity degree of getting values by sequence numbers is far less than that of comparison of IN field values, and thus query performance is considerably improved.

Suppose the fact table is T, the SQL statement can be written as follows: 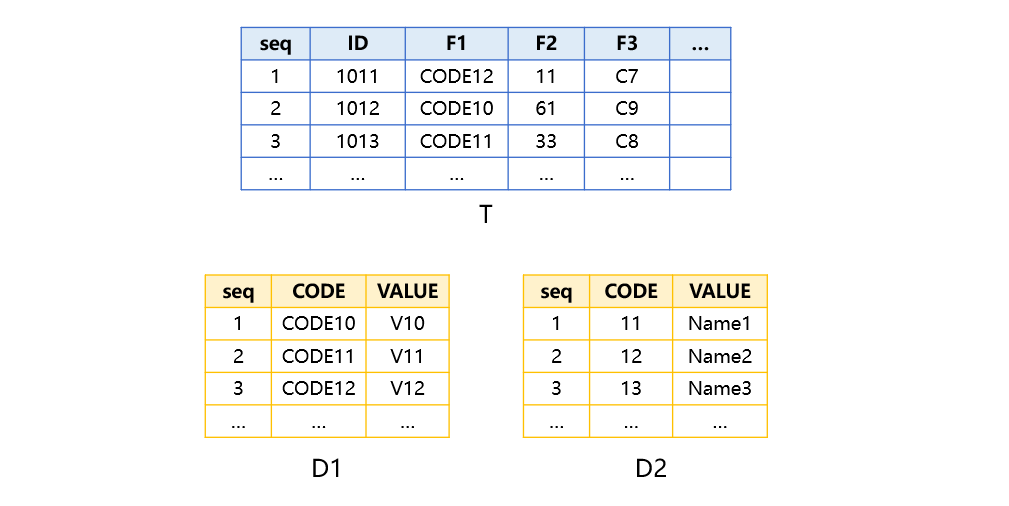 Step 1: Get the value range of the IN field.

Create a dimension table for F3 using the following code:

A1: Open the source composite table T-original.ctx to get F3 field.

A2: Use groups function to group F3 field since the number of values in F3 is not large and return a result set ordered according to the order of F3.

Enclose F3 by single quotes to distinguish the field name from the namesake cell name. Single quotes are also used when a field name is the same as the variable name.

Note: F1 field and F2 field’s dimension tables D1 and D2 need to be ordered by CODE, too. If the original data is unordered, as sort function is needed to perform a pre-sort.

Step 2: Convert field values in the fact table into integers.

The following code converts values of fields F1, F2 and F3 in table T into sequence numbers in their corresponding dimension tables:

A2: Define the sequence of dimension tables to be converted.

B2: Open A2’s dimension table files in turn, retrieve data, and get the sequence of CODE field.

A3: Get all fields of A1’s table to define a cursor and convert values of F1, F2 and F3 fields into corresponding sequence numbers in the dimension tables.

Below is the converted table T: 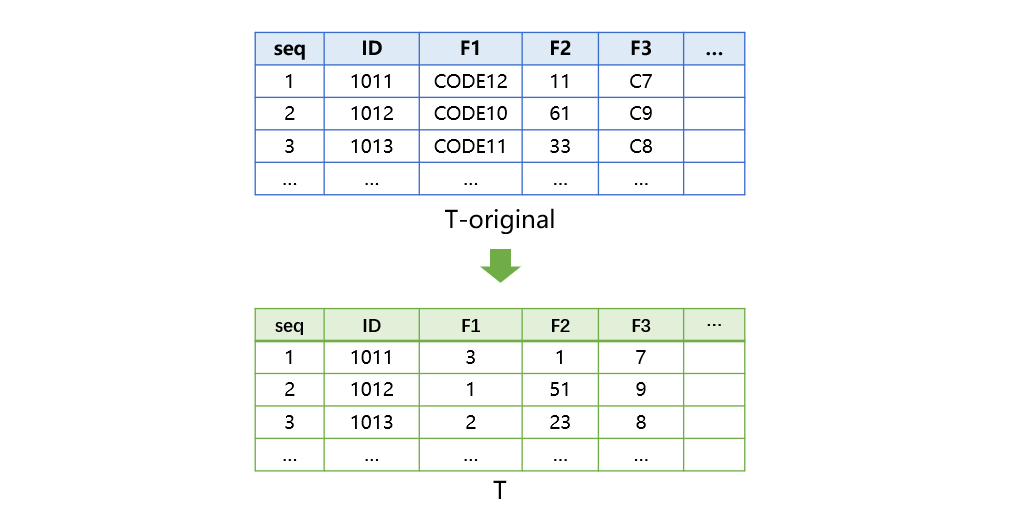 A2: Import D1.ctx and get the sequence of CODE field values. The result is as follows: 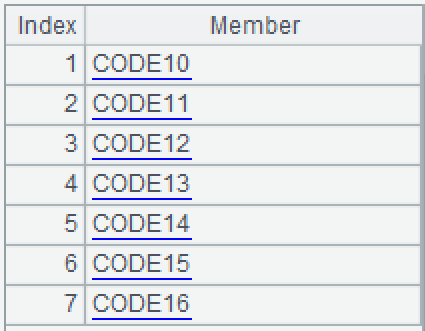 A3: For each value in A2 from the beginning, set the corresponding sequence numbers of CODE values defined in parameter arg_F1 as true if they can be found, and false if they cannot. As the parameter is ordered, we can use contain@b to do the binary search. The result is as follows: 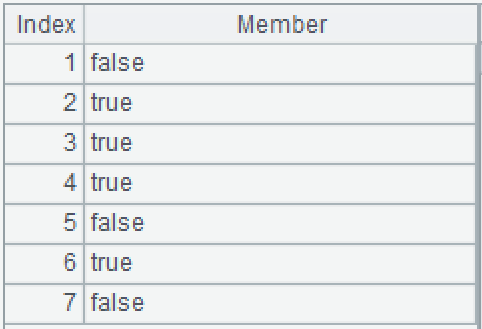 A4: Define the filtering operation before generating a cursor through a Boolean dimension sequence. Below is the filtering process:

As the set of values passed through parameter arg_F1 is ordered, we can use contain@b to calculate the Boolean dimension sequence through location operation. If the set of values is unordered, we need to perform a sort to enable binary search in the subsequent searches and locations (which are the number of members in the dimension table). Yet the performance boost is far more than the cost of the sort. Fortunately, compared with the later traversal, the parameter processing is not so costly. It is tolerable if no sort is done and contain@b is not used.

If the dimension table is relatively large, we can calculate the Boolean dimension sequence in an inverse way to achieve the ultimate performance possible:

A3: Define a sequence of the same length as A2. Its members are all false.

The algorithm returns the same result as the above, but it needs a different number of computations to calculate the Boolean dimension sequence.