Here are f1.txt and f2.txt (Sample data is listed below). Their first lines are column names. Task: calculate intersection between their Name fields.

In the above example, the whole text file is imported and automatically split into multiple fields and one field is retrieved for calculating intersection. To compare lines of data, just add @s option to import the text file as a single-column table sequence where the column name is Name(Tab)Dept, which contains the invisible character tab. The column name is illegal and can’t be referenced directly. In this case, we can use numbers to represent the column names to write the following code:

A convenient alternative is to return only the single-column detailed data as a set (sequence) by adding @i option. This way you can directly calculate the intersection with A1^B1:

The two algorithms have same results:

Read in the two files as cursors and update A1 with B1 by their logical primary keys. mergex() function merges multiple data sets while keeping the result set in order; @u option enables calculating their union. The merging result will be exported to a target file.

Cursors can handle files of any size. If a file is unordered, you need to sort it first by adding a sorting expression, as shown below:

Both files below are ordered by Name and Dept. Task: calculate their intersection.

This is an order-based set operation. We use merge() function to calculate the intersection, which is more efficient. Below is SPL script:

Sort files with sort() function if they are unordered. Note that sorting and merging small files is slower than processing them with common set-operation functions. merge() is more suitable for handling large files.

In the following diagram, there are 5 data files. Orders is the fact table and the other four are dimension tables. Task: Find orders where the customer and the supplier are in the same region, group those orders by cities, and count orders and sum the orders amount for each city.

The tables’ relationships are as follows: Import the files respectively, create associations between the fact table and each of the dimension tables, get eligible orders according to the associations, and then groups them and performs aggregations. switch() function creates foreign key style associations.

Data.txt is a tab-delimited, six-field text file, where here field contains semicolon-separated strings. List.txt is a single-column file. Task: If a record in Data.txt where the split here field value matches any line in List.txt, output this record to result.txt.

select() function gets desired records by splitting each here field value into a sequence of strings with array() function and calculating its intersection with A2’s sequence using operator “^” and according to the condition that the intersection result isn’t empty.

Data extraction from a multilevel directory

D:\files is a multilevel directory where each subdirectory contains many text files. Task: Retrieve a specified line (say, the 2nd one) from each file to write to d:\result.txt.

Set the initial value of parameter path as D:\files to begin data extraction; then call the script (c:\readfile.dfx) iteratively to pass different value to parameter path each time.

directory() function gets files under the root directory specified by parameter path; @p option requires full paths and @d gets directory names only.

~.fetch@x(1) retrieves the line at the current position (the 2nd line) and closes the cursor.

Split a file as multiple ones

sales.txt records a large number of orders. Task: Split the file into multiple files by year and month; the file name format is year-month.txt.

Group the file by year and month and loop each group to write data to a target file. Below is file 2009-01.txt:

Use cursor to import the file if its size is greater than memory capacity. If a group is still can’t be imported into the memory wholly, use groupx() function to group the file. The code structure maintains unchanged.

Stock.txt stores in-out stock records. One item may have multiple in-out records per day, or may have no records in days. The initial value for an item is 0. In means in-stock and out means out-stock. Task: Calculate stock for each item. Below is the source data:

A2 calculates the sum of quantities per item per day. B3 gets complete, continuous dates according to the earliest and the latest dates. Then group records by items and loop over each group to align records to B3. B6 calculates the each item’ daily stock and stores all stocks in A8.

Below is A8’s result: 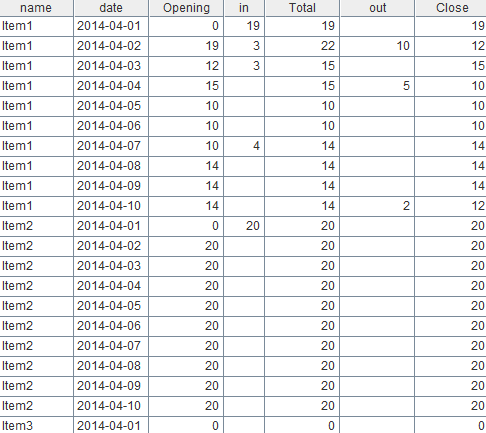