"Abstract   We often encounter the problem of transforming rows and columns of data tables in dai .."

We often encounter the problem of transforming rows and columns of data tables in daily work. SQL provides pivot and unpivot functions of static transposition, but the scope of application is limited. To implement some complex transposition functions with SQL often encounters the problem of too complex statements, and lacks a standard solution. The SPL language of esProc can make up for the deficiency of SQL perfectly because of its flexible syntax and abundant function library.
Next, the implementation of the transpose function is described in detail through some examples.

Pivot is not a function that existed from the very beginning. It is only supported by newer versions of major database vendors, such as Oralce 11g or Sql Server 2005.
As you can guess from the name, this function is to transform rows and columns, that is, to use the values in rows as column names. However, the rows and columns of the database, unlike ordinary tables, can not directly be X-axis and Y-axis mutually exchanged and the case is over. The reason for this is that columns in a database are unique (that is, column names cannot be repeated), while rows store dynamic data, which can be repeated if they are not used as primary keys. Therefore, the practical application of pivot basically follows the operation of grouping and aggregation, and each row of data of the column used for transpose (usually dimension) is processed into non-repetitive values by grouping, then the values of each row are expanded as column names.
From the specific application point of view, pivot’s function is actually to subdivide the aggregation results of a column into more specific aggregation results of columns, in order to achieve more intuitive visual effects.
Are concepts boring and hard to understand? Let’s illustrate with a specific example, for example, there is a StudentScore table in Oracle database:

If we want to count the highest scores of each subject in each class, the traditional method is:

The impression of above results can be said to be very bad: first, in the “class” column, the repetition of Class 1 and Class 2 makes it easy to misread; secondly, in the “subject” column, the three subjects of Chinese, Mathematics and English are all put together, but in fact, the highest scores of the three subjects have no comparative significance.

In fact, we should prefer to see the following results:

In this result, each of the three subjects in the subject column is separated as a single column respectively, which not only reduces the useless duplication, but also clarifies the mutual independence among the highest scores of each subject, and seems to be much clearer.
It can be said that pivot was born for this purpose. In order to achieve the above results, now the query is written as follows:

Code description：
A1: Connect the database
A2: Extract data for preprocessing (This step can be further extended to complex calculations such as summing up or aggregation. For specific methods, please refer to the relevant articles.)
A3: Implementing pivot column-to-row transposition and presenting it, the effect is exactly the same as that of Oracle pivot.

3. Other usage of Pivot

In addition to data presentation requirements, when rows are converted to columns, you can also implement inter-column calculation. Because the properties of columns and rows are different, some calculations between columns will be more cumbersome to implement between rows. For example, the weights of the three subjects of mathematics, English and Chinese are 0.6, 0.3 and 0.1. The average scores of the three subjects of two classes are used to calculate the evaluation indexes.

The above calculation, if it is to be implemented between the rows, will be a lot of trouble, interested students can try it on their own. 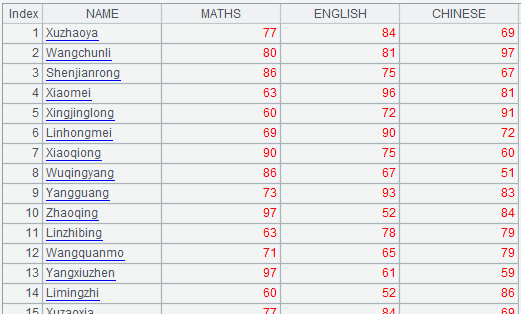 The results of calculation are the same (there may be slight difference in sequencing): 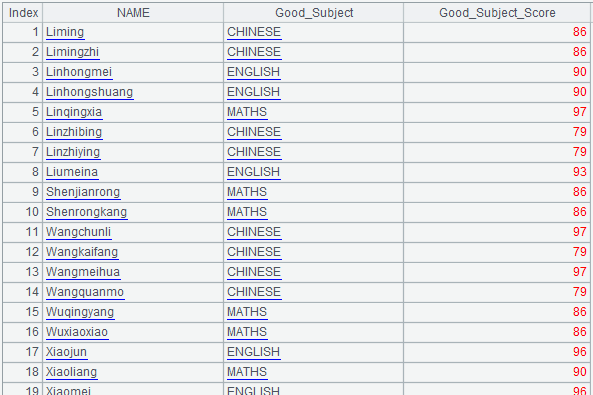 Sometimes more complex transposition operations are needed, for example there is a student score table as follows:

And we want to get a student score table similar to the following structure (meaning to look at the changing trend of a student’s performance in a subject):

Here, first of all, we need to merge mathematics, Chinese and other columns into subject column, which need column-to-row operation; and to split term column into term one and term two columns, we need row-to-column operation.

The examples given above are static transposes, and the tables and data required to be processed are “well-behaved”. But in the actual business, there are always some unruly aliens, and I believe that there are still a lot of them. In this case, using SQL, whether pivot / unpivot, case when, or anything else, is a little weak… What should we do then? At this time, the advantages of esProc are reflected:
For example, there is a personal income table as follows:

But we want to get a table similar to the following structure:

We are not sure about the number of columns, or even the names of columns, after row-to-column transitions. At this point, pivot functions that only apply to static transposes can not be used, but dynamic transposes are needed. esProc’s SPL language is much more flexible than the SQL language in dynamic programming:

Suppose I have a price list of vegetables for each day of the week. 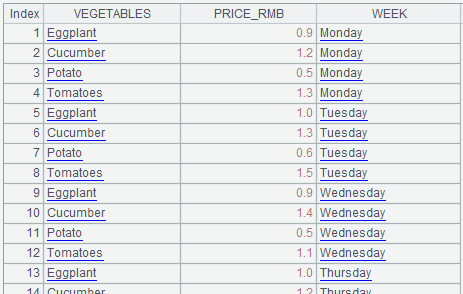 And I want to calculate the price trend of all kinds of vegetables in a week, which includes four states: rise, decline, stable and initial (Monday value).
The table structure is designed as follows:

The following table is obtained for “Price trend of vegetables in a week”: