"As we have said, data has types. A division operation may get a result of floating-point number. .."

As we have said, data has types. A division operation may get a result of floating-point number. If we need to get an integer, by rounding about the result, for instance, what should we do?

It seems that we haven’t introduced a method for doing this. Even if the result is an integer (like 6/3), it will be represented by a floating-point number (3.0). How will it be converted into an integer that can be identified by the computer?

We need int() function to get this done.

int(x) calculates the largest integer that is less than x. It reads a little confused. But with several examples, you will know how it works:

(Here = represents a mathematical equation rather than an assignment statement)

It is easy to prove that int(x+0.5) is equivalent to the integer resulted from rounding up x.

int(x) takes number x as the parameter and returns the largest integer that is less than x. It is called integer function.

The significance of library functions lies in the reusability. The ready-made code for a specific operation that is packaged into a library function is convenient to use anywhere, anytime, while a rewriting is troublesome and error prone.

Moreover, most of the time programmers who develop high-level application cannot write code for implementing the low-level operations. They can only be achieved through library functions. It is almost impossible to implement int(x) function in SPL (It’s almost because hardcoding can make it if efficiency is completely not a concern. You can try to do this when you finish the relative section in this book).

You might be curious about how library functions come into being since they cannot be written in your currently used language?

This is another issue.

Actually, the concept of function in the programming language is wider than that in the high-school mathematics.

A function does not necessarily have parameters. SPL pi() function, for instance, returns π only . To calculate the area of a circle, we use the following code:

A function may not have a return value, like output(x) function.

Execute the code and we can view Hello,World in the right bottom section on the following interface. 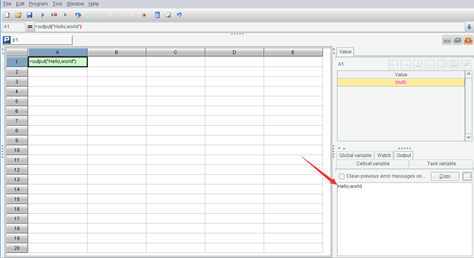 output(x) function outputs the value of x to the output window on the right bottom section, so it will not return a value.

A function that does not return a value execute an action instead. It is more like a statement.

The word “function” also has the meaning of purpose or activity. This shows that the value return is the purpose or the target activity we want to achieve. For programmers, value returning is not the only significance of functions, they use them to do anything that can be done.

In this sense, we, sometimes, call the use of a function calling it, like it is called up to perform a specific task.

Like functions in mathematics, functions in programming languages may have more than one parameter. max(x,y), for instance, returns the larger one of x and y.

Some functions have a fixed number of parameters. The power function power(a,x) that returns ax always have two parameters. max()function, however, can have more parameters. Both max(1,2) and max(3,4,5) are allowed.

The parameters of a SPL function can have default values. Parameter n in pi()function takes 1 as its default. pi(n) means nπ , but in most cases the function returns 1π. So pi()means pi(1). It is important to know the parameter default values, otherwise you may not understand the code written by others.

All features introduced as yet are not beyond Excel.